Contact us between the hours of 9.00am to 5.00pm | Click here
Lifestyle Blog | Loofes ClothingInfoFootball’s Rising Stars
Menu
Info

With the new season here, we take a look at the players to watch out for this year. We have listed a few names which you may want to keep an eye on, as they are set to take the leagues by storm this season.

The seventeen year old Arsenal player has been a star performer for the club in recent matches and is set to make a name for himself in the coming months. He has been one of the club academy’s most promising youngsters for a while now and is due to make his breakthrough this season. The midfielder, who has also played for the England under 17 squad, is a talent that was signed by Arsenal in 2008 and since then he has worked his way up the Gunners age groups where he signed his professional contract last year, shortly after his seventeenth birthday.

Twenty year old Connor is currently on a four year deal with Bournemouth after a transfer from Blackburn Rovers. The winger has already shown a lot of potential and is set to be one of the season’s biggest stars. Connor has been a regular for a lot of early season squads, but was finally given the opportunity to showcase in talents in a match against Queens Park Rangers early this year. Since then, he has caught the eye of many and has also played for the England under 18’s team.

After scoring the goal that secured promotion for Brighton and Hove Albion, Solly March is another name that many are keeping an eye on this season. After recovering from a ligament injury, the midfielder came back with a bang and has already played in thirty five league games since beginning his senior career back in 2014. He has been deemed ‘quick and inventive’ and has plenty of potential to thrive during the new season.

Having already appeared six times for Chelsea in the premier league, twenty one year old Ruben is set to be a name to watch this year. He has already been an impressive performer for the England under 21’s team and has been said to have great potential by Conte. Ruben has also captained the under 18s team for Stamford Bridge before making his Champions League debut in 2014.

The Crystal Palace midfielder certainly impressed Alan Pardew last season and earning a spot on the bench during the premier league match against Manchester United. Luke incurred a hip and calf injury which scuppered his chances at proving his full potential last season, but is eager to showcase his talents this year. At just eighteen years old, he has plenty of opportunity to prove his name as the most promising player of his age at Crystal Palace.

As a highly promising winger, twenty year old Kasey is set to sign for Huddersfield after assisting the Terriers to the Premier League last season. He scored within the first ninety seconds of his debut for the club and has shown plenty of dynamism and flair during his time playing for Chelsea’s youth team. David Wagner has been impressed by Kasey and is set to prove his worth this year.

The seventeen year old has already impressed Klopp at youth level and is set to make a name for himself for Liverpool once he has recovered from his foot injury. He was fast tracked from the under 18 team to the under 23 team last season and has also been a regular scorer for the England youth squad too. Klopp has also called him a natural striker and is definitely one to look out for this year.

The seventeen year old from South London has been considered one of Manchester City’s brightest prospect and is set to shine this season. Jadon was named the Golden Player at European under 17s Championship, an accolade once won by Wayne Rooney. A number of other premier league clubs have also shown interest in the young player but is set to stay at City for the time being. Sancho has been a key player for City in recent games and is a slick winger who is quick on his feet with a lot of ball control and speed. He has scored 15 goals in 19 games for the under 18 squad and is said to have Raheem Sterling as his inspiration.

As an impressive defender, nineteen year old Axel is set to be a star for Manchester United this season. After Jose Mourinho said he did an amazing job against in a win against Arsenal here is looking forward to the Rochdale lad making a serious breakthrough this year. The defender has also player for the England under 19s squad and is said to be a good reader of the game with great pace and athleticism, which should help him see success through the season.

At Loofes we are a little bit biased and will of course be supporting our home team of Manchester United with our range of football kits from Adidas Performance. We stock both home and away kits for men, women and kids, so you can support The Red Devils this season in the team’s official shirts. 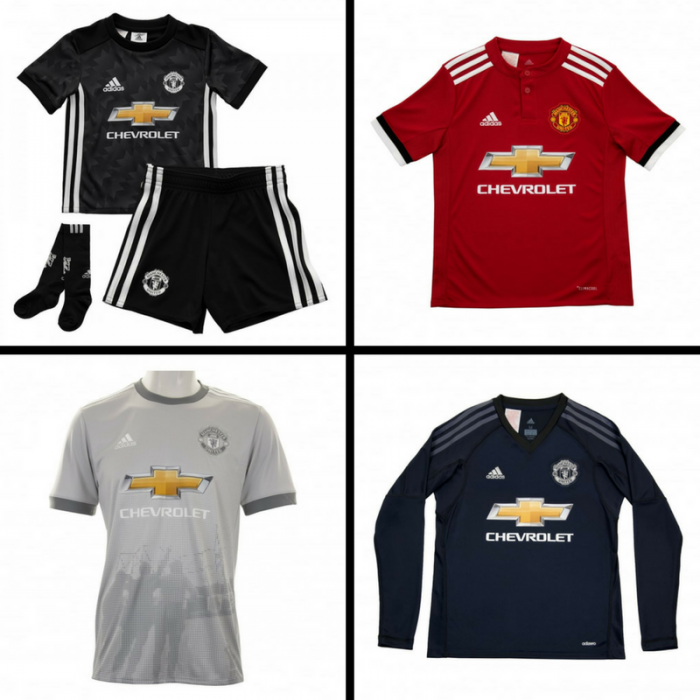